I got my copy from a bundle sale where multiple cameras were sold together. Vitomatic wasn't the camera I was after but I was pleasantly surprised when I first handled it. Although I like Voigtländer, I thought that this camera would be quite cheap-feeling. Turns out I couldn't be further from the truth. You should be able to find this camera for $20. Roughly. There are certain Vitomatic versions that cost more ( like the ones with Ultron lens ) but IIb is not one of those.

Vitomatic looks best in real life. It's difficult to judge its size from a photo. It's a small and compact camera. It's not a pocketable camera but it's still small.

Shutter will be cocked as part of the film advance but it requires film to be loaded in the camera. Film sprockets engage a gear that cocks the shutter. No film means that the gear is not engaged and you can twist the advance lever forever and nothing will happen. This is why you can find these cameras sold as broken as it can seem like the camera is broken if there is no film.

There are other very nice processes. Like the film rewind process and loading process. To rewind film you must flick a switch at the side of the camera. That will release a lever on the film rewind wheel and allow you to rewind the film. Flicking the switch feels great and rewind is solid too. After you're finished, push the lever back and it will change the switch back to its initial position. Most amazing.

Opening the camera is also quite unique. The camera has a back door which is not unusual in itself. How you open it is. It's hard to describe it with words so you will have to observe the images.

Lens is the least amazing feeling component of the camera. The controls don't feel terrible but they don't excite the primal pleasure sensors in your brain.

From a visual perspective the camera is cute and looks good. If I had to single out a particular component then it would be the exposure counter. It, again, has a unique look that I haven't seen before.

Sadly it's not all orgasms. Although the film advance feels amazing, it doesn't work that well. I can only advance the film ( and cock the shutter ) if I hold the camera in a very particular way. I tried opening it up to fix it but you have to dig quite deep to get to the part which handles the advance process. I have left it as is for now as I can get it to advance consistently as long as I hold the camera "the right way".

Vitomatic is a manual, mechanical camera so there aren't too many features. But what is there is useful and usable.

The viewfinder is quite big and not too dim. It has a blue cast to help with the contrast for the rangefinder patch. Camera has a coupled rangefinder and the patch is a medium sized circle with fuzzy edges. Not my favourite as I prefer square patches with solid edges. The contrast for the rangefinder patch is acceptable but not amazing. You shouldn't have too many problems using it in most circumstances. The rangefinder base length is very small so you won't be focussing with utmost precision anyway. Look at the coupled rangefinder as a small extra in an otherwise scale focus camera.

The framelines are bright and thick but not too thick. Thankfully it has square corners instead of rounder ones. Framelines aren't parallax corrected but there are close-focus marks to help focussing close.

That's it for the viewfinder. It's not the best in the world but it's very usable.

All controls relating to exposure are located on the lens. You can select the ISO for the loaded film as well as the shutter speed and aperture. You pick the settings yourself and it doesn't require electronics to expose a photo.

There's not much to say about these controls. ISO control can be ignored since the light meter doesn't work anyway. Shutter speed and aperture get their own rings to turn. Aperture goes from f2.8 to f22 and the marks are for full stops. Aperture control appears to not have clicks so you can select any value in between. Shutter speed goes from 1 second to 1/500th of a second, also in full stops. Shutter speed control does have uninspiring clicks.

That's all there is to say about exposure controls. They don't feel the best but it's not complicated to use them. I would've preferred a clicked aperture ring but it's still fine.

Voigltänder Vitomatic IIb comes with a fixed Voigtländer 50mm f2.8 lens. It's a simple Tessar design lens that isn't trying to be anything groundbreaking. I've only used one Color-Skopar lens before - on a Bessa I and I love the rendering it provides. I am waaay less fanatical about the results from this lens. Not sure if it's down to my copy or if this particular Color-Skopar isn't that fabulous or if Color-Skopar lenses don't render as well in 35mm format.

I can only describe the rendering as average and boring. It won't offend but it won't amaze. It's acceptably sharp for most films. Contrast is acceptably average. I've not seen any three-dimensional pops. Bokeh is boring but not harsh. At least when you can get a bokeh out of it. The rangefinder isn't too precise so you won't be portrait hunting with this camera.

Focussing feels acceptable but not too smooth. Something that could be improved with a CLA I imagine. It also has a hyperfocal distance scale which can be useful as the rangefinder isn't all that great.

That's all I have to say about the lens. It won't get you in trouble. It also won't floor you with a rendering from the gods.

Although I love the feel and build of the camera ( for the most part ) it is not the best handling camera out there. The smaller size can be difficult to grip. The larger weight doesn't help in that aspect as well.

A strap could be helpful but this camera doesn't have a way to attach a strap. It's meant to be used in a stupid leather case and nobody likes leather cases. Most of the time I'm awkwardly gripping it to take photos and to carry it around. The small size does mean that I can fit it in some larger pockets which can be helpful.

The shutter button isn't at the top of the camera. It's to the right of the lens ( if you're looking at the camera as you would be when shooting it ). It feels like a good place as the finger tends to hover around there when trying to grip the camera with all your might. It also helps to have a very satisfying shutter release feel and sound.

Coming back to the amazing feeling of the film advance. It is amazing but it also has a fair bit of travel. Almost 180 degrees worth of travel. That means that you won't be advancing the camera with one hand. I forgive it though as the process of advancing the film feels like a great gift.

I am conflicted with this camera. I love how it feels. I am bored by the photos. This is the first camera that I want to pick up and play around with but not actually take any photos with. Even whilst writing this review I'm picking the camera up every few minutes to advance the film. I have a test roll that I can advance and take dummy photos with. After the roll is done, I wind it back and do it all over again. That is what this camera does best for me.

Taking photos with it doesn't excite me. From the non-ideal handling to the boring results. I rather shoot blanks.

Maybe you can get better photos than me with Vitomatic. Maybe it fits better in your hands or you actually like camera cases. Those are possibilities that would make this camera worth it. But even without these — I would still recommend it. If only for the film advance process. 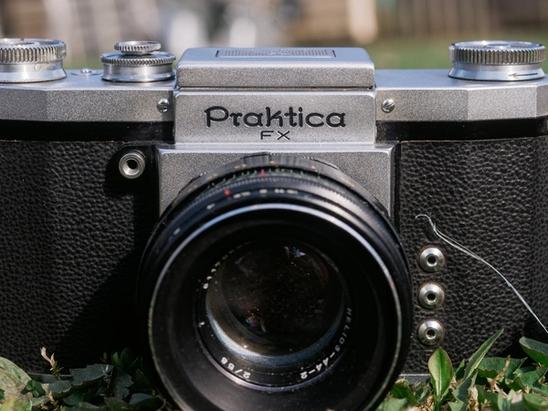